In 1925 J. Ernest Dionne and Henry Lewia began Skowhegan Press, Inc. The company was originally located near the current location of the L.C. Dill center in downtown Skowhegan. After several years, Mr. Dionne bought out Mr. Lewia and became the sole owner. Shortly thereafter the company moved to its current location on Water Street where it has been for more than 80 years. 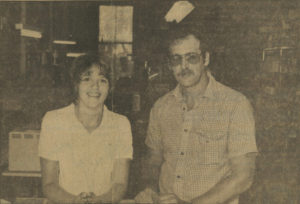 Jim and Joyce DionneDuring the early 1960’s, the company expanded to offer a line of office supplies. This expansion was eventually spun off into a separate company known as the Paper Klip which is still in business in Skowhegan today.

In 1985, ownership of the company transferred to the third generation of Dionnes, Jim and Joyce. Under Jim’s tenure the company purchased its first graphic design computer system. They struggled through the 90’s as technological advances and health issues begun to take their toll. 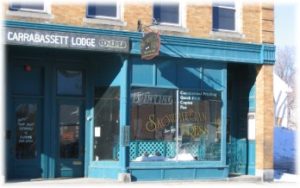 In 2001, Skowhegan Press was bought by Bromar Inc. a partnership of Jerry Breault and Jeremy Martinez. Neither man had a background in the printing business at that time. These entrepreneurs were simultaneously able to learn the mechanics of the printing business and upgrade to the latest technologies, replacing the companies offset presses with more modern presses and adding digital direct-to-plate printing systems. They were also pioneers in the digital printing era and were among the first to introduce high-quality full-color digital printing in Maine. Under their leadership Skowhegan Press has experienced tremendous growth. 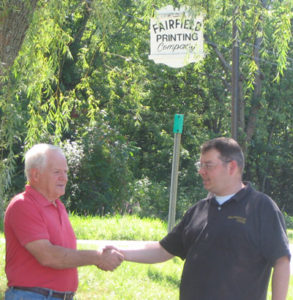 Jeremy Martinez and Dan LaFlamme at closingFairfield Printing operated out of the basement of its former owner, Daniel LaFlamme. Skowhegan Press consolidated the equipment and operations into its downtown Skowhegan location, and added FREE delivery to customers from Fairfield Printing to offset the additional travel burden of moving the facility 17 miles north.

The new Skowhegan Press building at 17 Parlin StreetIn 2009, Skowhegan Press purchased its own building, and moved to 17 Parlin Street. This move expanded the space from 1000 sq feet (at the downtown location) to 4000 sq feet. The extra space has proved absolutely necessary to the continuing growth of the company. The company can also now accommodate tractor trailer deliveries and palletized paper orders. We’ve also been able to add staff and new equipment. Stop by and we’ll be happy to give
you a tour. If you aren’t sure where we are, click on the location page.

In 2013, Skowhegan Press expanded again by purchasing Carrabassett Marketing & Printing. The company’s previous owners, the Marshalls, wanted to focus all their efforts on their thriving PR and marketing services firm, “Nancy Marshall Communications.” They wanted to know the printing customers would be taken care of, and were happy to transition their customers over to Skowhegan Press. 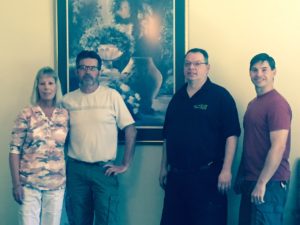 Having purchased 4 different printing companies, and merging them into one, it began to feel a bit confusing for both the clients, and the staff to know who we were/are. In 2016, the decision was made to re-brand the company as “Bromar Printing Solutions” complete with a new logo and corporate image. We still maintain the contact info and business names of all of our predecessor companies: Skowhegan Press, Fairfield Printing, Carrabassett Marketing & Printing, and Haskins Printing. Though a difficult decision to make we felt the Bromar Printing Solutions was a better fit for who we are and where we are going as a company.

Today, Bromar continues to grow, and offer new product lines. As a company with a history of longevity, Bromar Print Solutions will be here for all your future printing needs.